Acclaimed political writer Iain Macwhirter is one of Scotland’s most prolific and influential journalists. He is the political commentator for the Herald and Sunday Herald and writes regularly for other publications. He also been a prominent broadcaster for over 20 years having presented BBC political programmes in Westminster and Scotland. In Tsunami: Scotland’s Democratic Revolution he examines the shifting political landscape in Scotland in the light of the events of the past couple of years. Where are we now and what does the future hold? 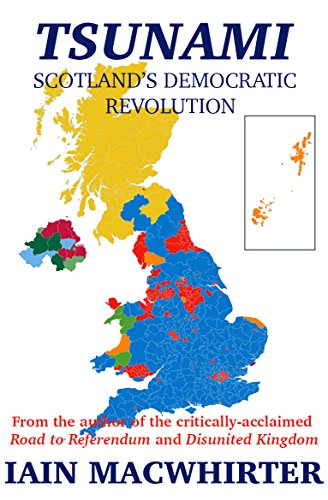 Following on from the critically acclaimed Disunited Kingdom: How Westminster Won A Referendum But Lost Scotland, Iain Macwhirter casts his expert eye over the SNP’s victory in the 2015 General Election, which saw Scotland swept by an unprecedented wave of yellow. One of the UK’s most insightful political writers, Macwhirter examines the factors behind this result including the demise of the Labour party in Scotland, Nicola Sturgeon’s SNP vision and leadership, the growing dissatisfaction with Westminster, and the enduring passion for independence. Tsunami ends with Macwhirter looking forward to ultimately consider where Scotland, and the UK, must go next. Praise for Iain Macwhirter: “A truly important book, particularly at this moment.” ~ Andrew Marr. “A terrific book […] full of shrewd insights. I’d recommend it highly.” ~ The Guardian. “His writing and broadcasting on politics in Scotland have been the benchmark by which many of us judge our own, more modest, contributions.” ~ The Observer.