James Robertson is originally from Bridge of Allan, Stirlingshire. He is the author of several short story and poetry collections, and has published six novels: The Fanatic, Joseph Knight, The Testament of Gideon Mack, And the Land Lay Still, The Professor of Truth, and To Be Continued…. He is also a co-founder of the Scots language imprint Itchy Coo  which produces books in Scots for children and young people.

In his latest novel To Be Continued…., Douglas Findhorn Elder is in a sorry state. He has just turned fifty, split up with his partner and jumped (before he was pushed) from his job at an ailing Edinburgh newspaper. On the night of his birthday, he makes an unexpected new friend: a talking toad. When a new work opportunity takes the man from the city to the Highlands, the toad goes with him……. 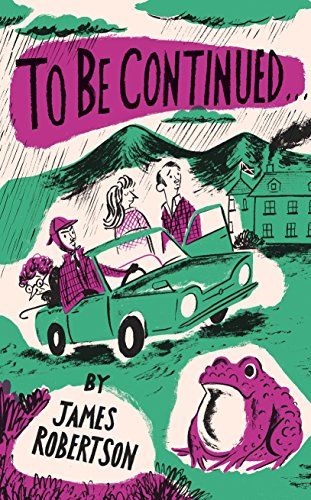 Douglas Findhorn Elder is in a sorry state. He’s just turned fifty, split up from his girlfriend and been pushed out of his job in an ailing national newspaper. On the night of his birthday, he makes an unexpected new friend: a talking toad. So begins a wild goose chase that will lead Douglas out of his cosy house in Edinburgh and across the country – all the way to crumbling Glentaragar House in the distant West Highlands. Awaiting him along the journey are a semi-criminal hearse driver, a hundred-year-old political firebrand grandmother, a split-personality alcoholic/teetotaller, an elaborate whisky-smuggling conspiracy, a mysterious woman with a rather enchanting Greek nose, and maybe even a shot at redemption…

In this gloriously surreal romp, James Robertson proves once and for all that the important things in life – friendship, romance, a very fine malt whisky – come when you least expect them.